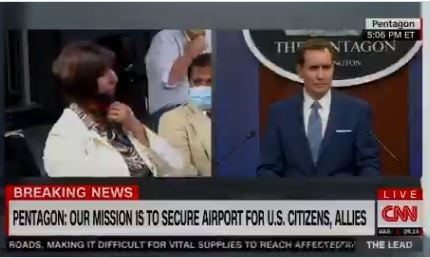 On Monday during the Pentagon briefing on the collapse of Afghanistan government a female Afghan reporter broke down in tears.

The woman remarked on the many improvements for women following the US operation in the country starting in 2001. She then spoke about her fears for women in Afghanistan moving forward.

Watch this Afghan reporter break down in a very emotional question about the safety and future of Afghani women to Pentagon Spokesman John Kirby. pic.twitter.com/OezkGLq55R

The post Heartwrenching: Female Afghan Reporter Breaks Down During Pentagon Press Briefing on Future for Women Under the Taliban in Afghanistan (VIDEO) appeared first on The Gateway Pundit.