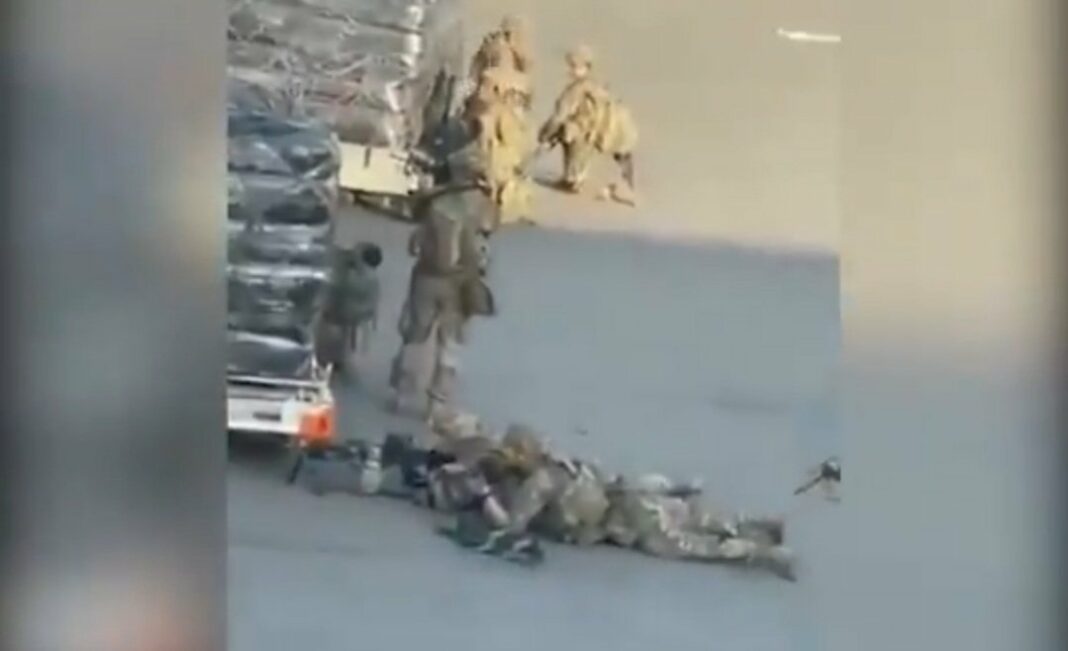 The last-minute evacuations at the Kabul airport have been a disaster.

Thousands of US troops have been deployed to the airfield to assist in the effort to get American citizens out of the country safely as Biden scrambles to get them home after his terrible mismanagement left them there to suffer the inevitable overthrow of the country at the hands of the Taliban.

During the rescue efforts, US troops were shot at and forced to return fire in two separate attacks at the airfield. Our Soldiers quickly neutralized the threats, leaving two hostiles dead, before they were able to cause any harm.

Pentagon Spokesperson John Kirby spoke to reporters on Monday about the incidents, explaining that two “armed individuals” were shot and killed after opening fire at the evacuation, where he says about “2,500 US troops” are currently stationed.

It is unconfirmed but this video by GB News may show the moment Soldiers were engaging one of the threats. They can be seen ducking behind a vehicle and aiming their weapons at something that is out of the camera’s view.

Footage shows US troops at Kabul airport as crowds of civilians attempt to flee Afghanistan. pic.twitter.com/PxqNVkdlGE

It is not known if the “armed individuals” who attacked were Taliban or Afghan citizens who were upset about being left behind. Over the course of the day thousands of people had gathered around the airport in an attempt to flee the now terrorist-controlled state.

The unrest at the airport has lead to more deaths than just the two who opened fire. According to initial reports, there have been 7 people who have died so far, none of which are Americans.

In one tragic incident that was captured on video, 2 Afghans who were so desperate to get out of the country can be seen clinging to the landing gear of a U.S. Air Force C-17 Globemaster II as it flies off into the sky, eventually falling off and plunging to their deaths.

In other videos that were posted online, frantic mobs of people can be seen attempting to force their way onto US military aircraft.

Insane. Don’t have any other words.

They even had to deploy combat helicopters to clear the runways so the rescue planes could depart.

AH64s combat helicopters opening the way to allow USAF C-17's take off in the middle of over crowded runway 😱🙈
Kabul Airport Chaos pic.twitter.com/6Jlm8Z5IQT

Keep in mind, this is just day one of the latest global catastrophe that Joe Biden’s incompetence and selling out has resulted in.

How bad will it get from here?

The post Just In: Two Armed Afghans Dead after US Troops Forced to Return Fire During Evacuation at Kabul Airport appeared first on The Gateway Pundit.