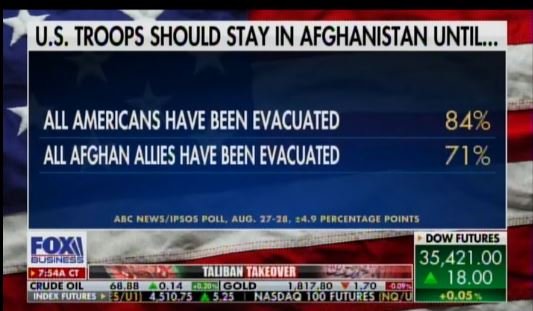 The latest ABC-Ipsos poll shows 84% of Americans believe the US should stay in Kabul until ALL Americans are evacuated from Afghanistan.

That is a huge number!

71% say US troops should stay until all Afghan allies are evacuated.

But Joe Biden and his woke generals disagree and as a result, we are witnessing the greatest military disaster in US history entirely created and carried out by American elites.

The Biden Administration is admitting that at least 250 Americans will be left behind when America pulls out of Afghanistan in the next 24 hours. That number is likely much higher and could be in the thousands.

Developing: Military Brass at Kabul Airport Is Refusing to Let American Women and Children Inside Gate

The Biden regime obviously doesn’t care about the will of the American people. And why should they if they are allowed to steal elections from here on out?

The post 84% of Americans Say Wait to Leave Kabul Until All Americans Are Evacuated — Biden Regime Disagrees and Will Leave Hundreds of Americans Behind appeared first on The Gateway Pundit.

THIS IS VERY SUSPICIOUS: Mysterious Proud Boy Member Pleads Guilty to “Seditious Conspiracy” for Talking Smack on Group Text But Was Not at Capitol

Democrat Fetterman, Who Lived Off of Mommy and Daddy Until He Was 50, Kept...