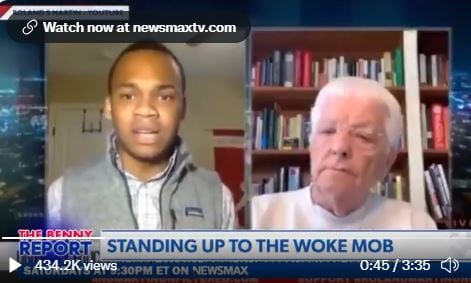 If you are in search of some good news, watch CJ Pearson refuse to live on the Democrat plantation. This young man is a true patriot.

Back in September 2020, Young conservative and Trump supporter, C. J. Pearson, shared on Twitter a portion of a class he was mandated to endure at the University of Alabama.

Here’s one clip, with her most mild commentary of the night.

How such a one-sided presentation could be sponsored by a public university baffles me. pic.twitter.com/yptePzHMfI

This weekend CJ got to confront horrible racist Jane Elliott in person.

Racist Jane Elliott tried to order young CJ on MSNBC. He wasn’t having it.

C.J. Pearson: “What is it with you and these commands? Do you think you get to tell black people what to do? Is that how you operate your daily life?”

18 year-old @thecjpearson took exception and swung back when an anti-Trump panelist told him to ‘think for himself.’

The post “Do You Think You Get to Tell Black People What to Do?” – EPIC! – CJ Pearson DESTROYS Angry Racist on MSNBC (VIDEO) appeared first on The Gateway Pundit.

CONFERENCE SATURDAY: “The Rise of TRUTH, The Demise of Machines” in Tempe, AZ with All-Star Speaker’s List

CONFERENCE SATURDAY: “The Rise of TRUTH, The Demise of Machines” in Tempe, AZ with...

“It’s Not About Kicking Balls in the Authority Or Anything” – John Fetterman When...

MUST-SEE VIDEO: “Maybe God Is Tapping Me On The Shoulder Saying, ‘This Is What...