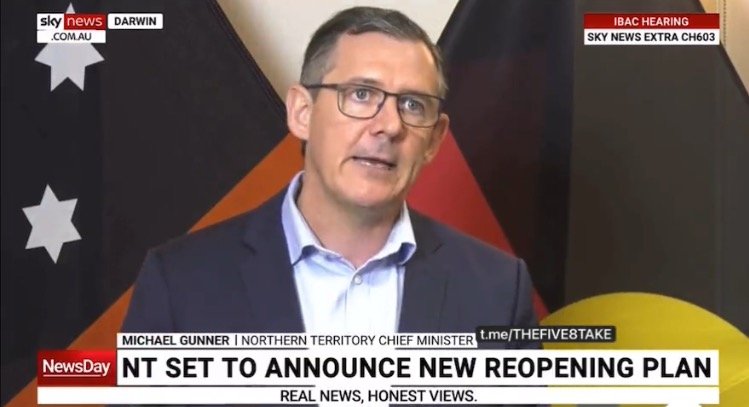 Australia – Northern Territory Chief Minister Michael Gunner this week announced the strictest vaccine mandate yet for frontline workers: Get the jab by November 13 or lose your job and face a $5,000 fine.

Chief Minister Michael Gunner has made it mandatory for all frontline workers to be vaccinated in the Northern Territory.

Workers have until November 13 to get vaccinated, or they will not be able to continue working. They will also risk a fine.

“You must receive the vaccine if in the course of your work you come into contact with vulnerable people, your workplace has a high risk of infection, or you perform maintenance of essential infrastructure or logistics in the territory,” Mr Gunner said.

“Not wanting a vaccine is not a sufficient reason,” Gunner said.

#Australia : Northern Territory leader Michael Gunner annouces that If you are not vaccinated by start of Nov you lose your job in NT and you will be fined $5,000 if you don’t comply
“not wanting a vaccine is not a sufficient reason” pic.twitter.com/5A3Nktfqxv

Last month, a former Australian member of Parliament came out and said Pfizer and AstraZeneca are paying lobbyists to direct Australia’s leaders to push vaccine mandates.

Clive Palmer, leader of the United Australia Party, said Pfizer and AstraZeneca were paying lobbyists tens of millions of dollars to direct Australia’s liberal leaders to push the double jab.

The post Australia: Northern Territory Chief Minister to Frontline Workers: Get the Covid Jab by Nov. 13 or Lose Your Job and Pay a $5,000 Fine (VIDEO) appeared first on The Gateway Pundit.

Doctor Who Claimed Obesity Can’t Be Treated With Diet and Exercise Tapped for Role...