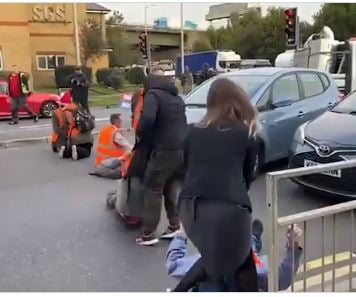 UK drivers fought back against the eco-protest mob who were blocking a junction at Dartford Crossing.

The drivers got out of their cars and dragged the far-left protesters from the street.

Insulate Britain stopped traffic at a junction north of the Thames, near an overpass for the Queen Elizabeth II bridge, the busy Essex crossing east of London.

The area near the Purfleet Freight Terminal is home to a number of business sites – and a route for freight. The road was set to reopen around 10.30am.

Irate motorists dragged protesters from the road, where they were sat down or laid out, as the scenes turned violent. The area is considered a bottleneck for freight lorries, drivers told LBC.

One man was seen ripping the Insulate Britain banners from activists, while others angrily remonstrated with them.

Drivers have fought back against eco-mob Insulate Britain, dragging them out of the road after they blocked a junction near Dartford Crossing.