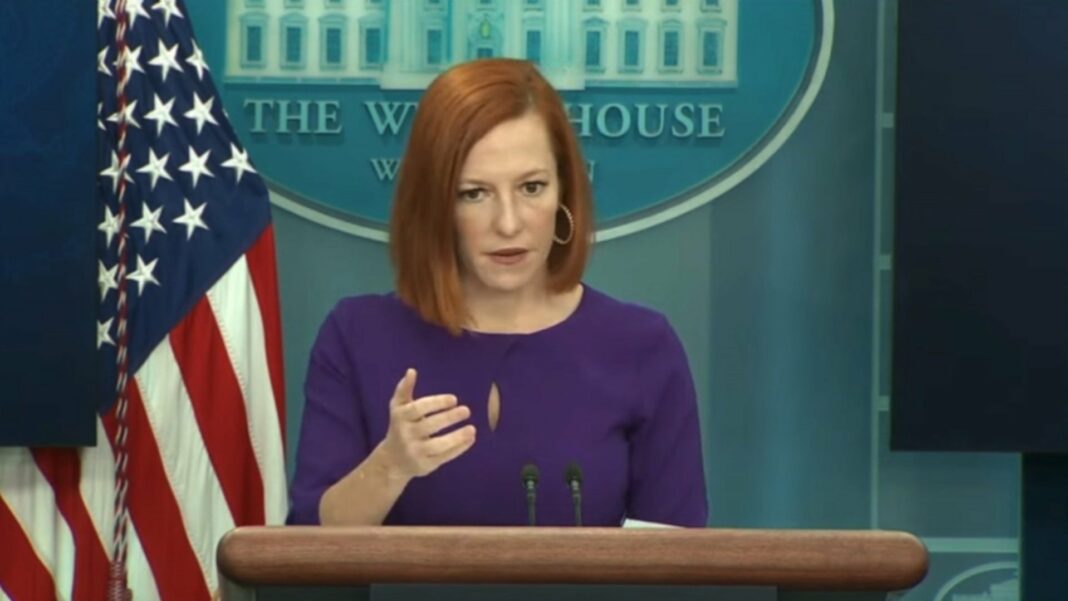 Following Saturday’s 12-hour standoff in Colleyville, Texas that resulted in jihadi hostage-taker Malik Faisal Akram being shot and killed, White House press secretary Jen Psaki was pressed on why the US government was seemingly unaware of Akram despite him being known to British intelligence agencies and being on a terror watch list as recently as 2020.

Just like Biden, the media, and even the FBI, who claimed they didn’t know the jihadi’s motive in entering the synagogue and taking hostages, Psaki shamelessly claimed ignorance even though Akram had a criminal record and had been a person of interest for several years leading up to him being allowed into the US by the Biden regime.

Joe Biden on Muslim Hostage-Taker: I Don’t Think There is Sufficient Information to Know Why He Targeted That Synagogue (VIDEO)

During Tuesday’s press briefing, one reporter specifically asked Psaki how it is even possible for a potential terrorist with a criminal record – who was on a watch list as recently as 2020 – could end up in a synagogue in Texas to commit such a heinous crime.

Once again, just like everything else that has come out since the incident, nothing about her answer is adding up.

Psaki claimed that Akram was checked “multiple times” by federal officials before entering the country, which apparently came back clean, inexplicably clearing him to come into the US despite the obvious red flags.

“Our understanding, and obviously we’re still looking into this, is that he was checked against US government databases multiple times prior to entering the country, and the US government did not have any derogatory information about the individual in our systems at the time of entry.

We’re certainly looking back ,as I referenced, at what occurred to learn every possible lesson we can to prevent attacks like this in the future. Beyond that, I’d certainly refer you to the Department Homeland Security.”

According to the BBC, Akram had a criminal record and was the subject of an MI5 terror investigation in late 2020, but by the time he flew to the US, he had been reassessed and taken off of the watch list.

Even though nothing had been flagged by US authorities prior to his entry to the US, Akram was somehow able to pull off traveling to Texas and carrying out his plan without interruption while he was still under an initial four-week investigation by law enforcement.

Akram is believed to have entered the US through New York’s JFK International Airport just two weeks ago, according to police sources who confirmed Akram was under temporary investigation when he took four people hostage at the Beth Israel Synagogue.

“He [Akram] had been the subject of a four-week ‘short lead investigation’ but nothing was found which justified putting him on a higher-priority list.”

Keep in mind, this jihadi psychopath was let into the country willingly. Once you consider how millions of unvetted illegals have poured into the country since Biden fraudulently took over – in addition to the tens of thousands of unvetted Afghan nationals – the fact that a known criminal and potential terrorist like Akram could slip through the cracks – let alone carry out this terror plot while under active investigation – is extremely alarming, to say the least.

How many more dangerous criminals like Akram are here thanks to Biden’s illegal invasion?

The post Despite Being Known by British MI5 and Being Placed on a Terror Watch List, Psaki Says US Government Had No ‘Derogatory Information’ on Texas Synagogue Terrorist (VIDEO) appeared first on The Gateway Pundit.

WHOOPS: George W. Bush Suffers Brutal Freudian Slip – “The Decision of One Man to Launch a Wholly Unjustified and Brutal Invasion of Iraq”...