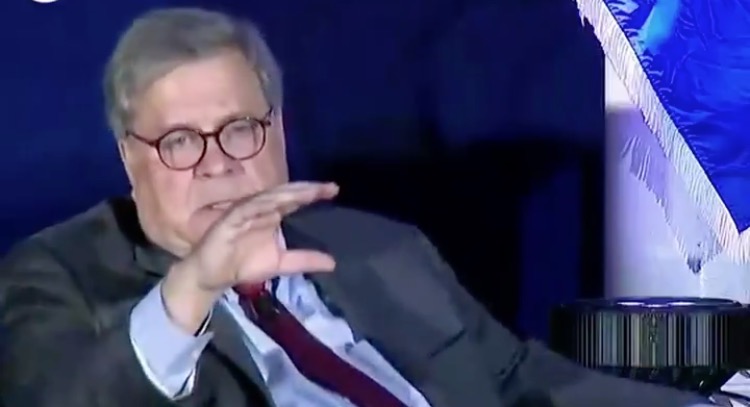 What an incredible disappointment Bill Barr turned out to be.  After ignoring massive election and voter fraud in the 2020 Election we now know that he shouted at President Trump about Hunter Biden’s laptop and did nothing about it.

What a total disappointment Bill Barr turned out to be.  After ending the corrupt Mueller investigation, based on lies from the Hillary campaign, Barr did virtually nothing after that.  You now have to ask if his entire time as AG was another Deep State setup.

Individuals in our law enforcement should be held to at least the same standards as the citizens they protect.  Barr brought none to justice.

Barr destroyed his name for centuries to come when he did nothing about the stolen election in 2020.  Barr looked the other way and allowed the election to be stolen.  The corrupt Biden family was awarded the election win and good Americans were punished as a result.  Now Bill Barr is pushing his book about President Trump and his actions while Attorney General.

The Daily Mail reports that Barr in his new book brags about confronting President Trump about Hunter’s laptop.

‘I was very disturbed during the debate when candidate Biden lied to the American people about the laptop. He’s squarely confronted with the laptop, and he suggested that it was Russian disinformation and pointed to the letter written by some intelligence people that was baseless – which he knew was a lie,’ Barr said Monday on Fox. ‘And I was shocked by that.’

Barr, who served atop the Justice Department under former President Donald Trump, has been promoting his book, One Damn Thing After Another.

In it, he writes that Trump tried asking him about Hunter Biden’s laptop – and he yelled at the president in return.

‘Mr. President, I can’t talk about that, and I am not going to,’ Barr said he told Trump.

Trump, in turn, was displeased with his tone.

Barr said he asked Trump to consider if the laptop had belonged to one of his five kids.

‘You know, if that was one of my kids …’ Trump began, according to the book.

Barr then cut him off.

‘Dammit, Mr. President, I am not going to talk to you about Hunter Biden. Period,’ Barr said.

We knew then and we know now that Hunter’s laptop was real.  TGP published information from the laptop days before the election showing the sick and addicted family that Joe built, with hookers, drugs and hidden acts behind closed doors.

Now we know that Barr wouldn’t discuss Hunter’s laptop with the President. The President had every right to know what was going on with the DOJ on this matter and Barr yelled at the President rather than address the issue.

Today the many crimes hidden in Hunter’s laptop go untouched. President Trump was right to demand that the crimes be addressed. Bill Barr, by ignoring the 2020 Election crimes and the crimes on Hunter Biden’s laptop failed.

The post Turncoat Deep Stater Bill Barr Yelled at President Trump About Concerns with Hunter Biden’s Laptop – Did Nothing appeared first on The Gateway Pundit.

For Cold And Flu Season, Fortify Your Kids With One Of Dr. Zelenko’s Final Creations: Kids Z-Stack

For Cold And Flu Season, Fortify Your Kids With One Of Dr. Zelenko’s Final...

Advertisers Leaving Twitter Over Their Ads Appearing Next to Child Pornography