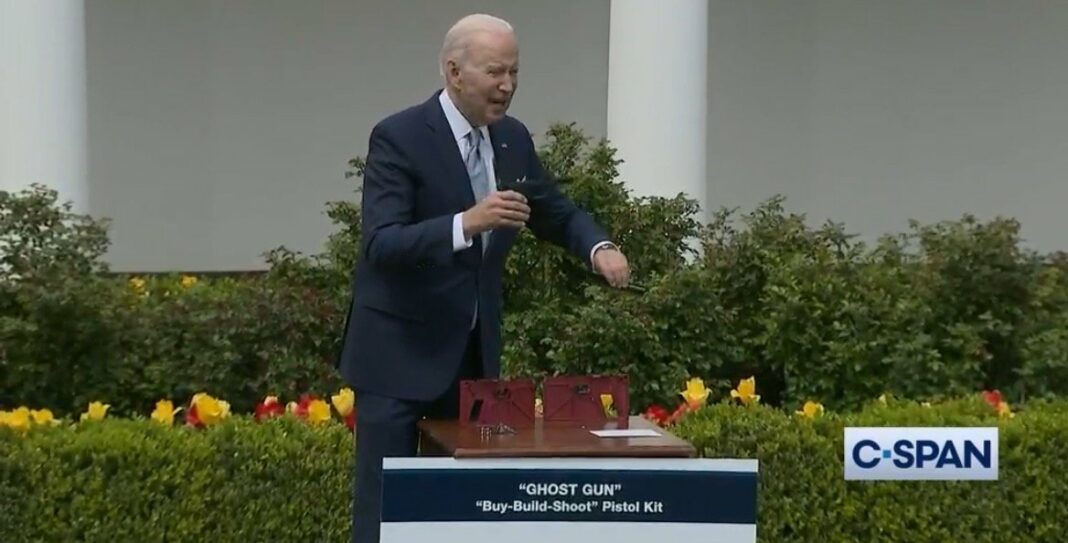 Joe Biden on Monday delivered remarks on gun violence from the Rose Garden.

“Today, the United States Department of Justice is making it illegal for a business to manufacture one of these kits without a serial number. Illegal. Illegal for a licensed gun dealer to sell them without a background check,” said Biden.

“We need Congress to pass universal background checks, and I know it’s controversial but I got it done once — ban assault weapons and high-capacity magazines,” Biden said.

Biden picked up a ‘ghost gun’ to showcase how easy it is to assemble a “Buy-Build-Shoot” pistol kit.

“It’s not hard to put together with a little hand drill at home. It doesn’t take very long. Anyone can order it in the mail — Anyone,” said Biden.

“A felon, a terrorist and a domestic abuser go from one gun kit to a gun in less than 30 minutes,” he added.

“If you buy a couch you have to assemble, it’s still a couch. If you order a package like this one over here that includes that parts that you need and directs the assembly of a functioning firearm, you bought a gun,” he said.

Terrorists and criminals can easily buy fully assembled firearms as well, so there’s that.

The post Biden Holds Up Ghost Gun Kit to Showcase How Easy it is to Assemble, Demands Universal Background Checks (VIDEO) appeared first on The Gateway Pundit.

Case Report Confirms mRNA Spike Proteins Found in the Heart and Brain of a Deceased Man – Spike Protein may have Contributed to the Patient’s...

Case Report Confirms mRNA Spike Proteins Found in the Heart and Brain of a...

Vermont Girls Volleyball Team Banned from Its Own Locker Room After Objecting to Transgender...