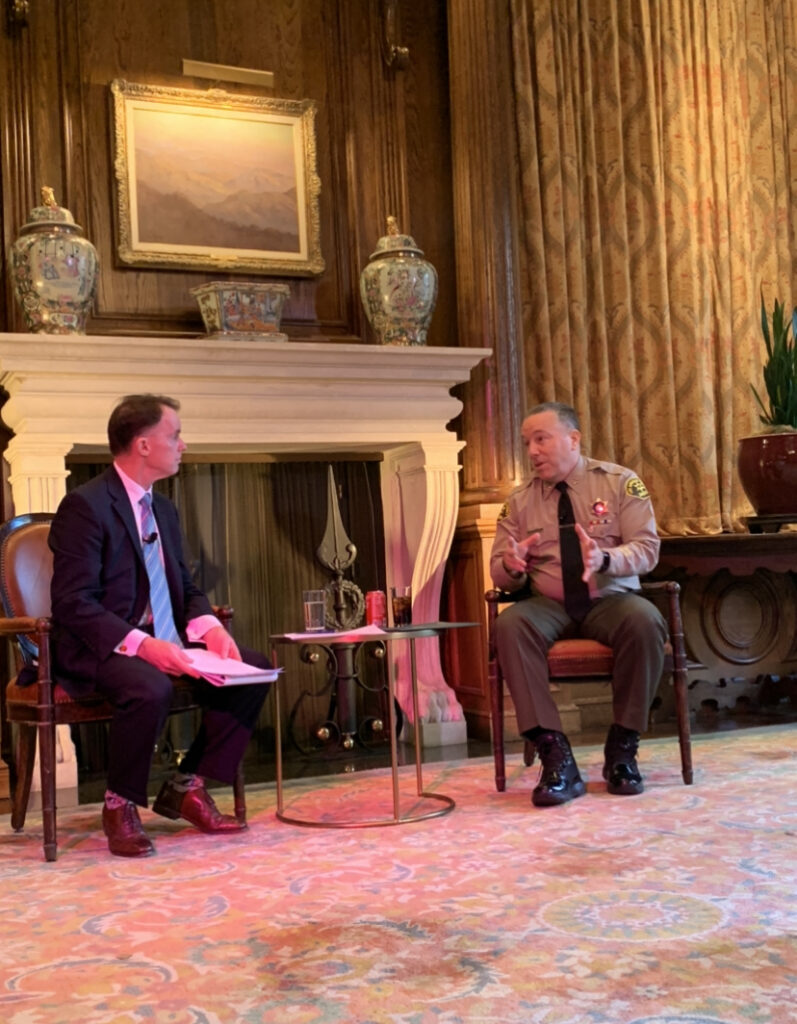 “We’re having people [from] out of county, out of state, coming here to LA to do home invasion robberies, burglaries,” the sheriff said, adding that “foreign nationals [are] coming here to do burglaries.”

Crime in the city is at a point  that the Los Angeles Police Department is telling citizens not to wear expensive jewelry, Villanueva, who was first elected sheriff in 2018, said.

His experience as a police officer years earlier taught him that the “criminal justice system is fundamentally broken,” Gascon wrote on Twitter, adding a long list of the changes he was making.

Those experiences taught me the criminal justice system is fundamentally broken.

“So today we will end cash bail for any misdemeanor, non-serious, or non-violent felony offense,” Gascon wrote.

Gascon announced that he was ending “enhancements,” which are factors such as gang involvement or previous offenses that allow for harsher sentencing by judges.

The new DA took the death penalty off the table as a recommendation, calling it “racist,” and said no juvenile would be tried as an adult.

Also on his first day in office, Gascon issued a memo listing 13 crimes that the District Attorney’s Office no longer would prosecute, including driving without a valid license, drug possession, loitering to commit prostitution, resisting arrest, and trespassing.

The results of such changes are “creating a dystopian society as we speak,” Villanueva said at the Heritage event.

Violent crime in Los Angeles is up over 11% since Gascon’s election, according to the Los Angeles Police Department.

Grand theft audio is “up 60% in two years,” the sheriff said, noting one individual was “arrested three times in one day for grand theft auto.”

“There were no consequences,” Villanueva said of that case.

Crime in Los Angeles largely had been trending downward since 1993, according to the Los Angeles Almanac. But in 2015, violent crime began to increase following passage of California’s Proposition 47 the year before.

Prop 47, which Gascon co-sponsored, decreased the consequences for many crimes and made some felonies into misdemeanor offenses. For example, the threshold for misdemeanor theft went from $400 worth of goods up to $950.

“That’s why [in California] you can walk in the Nordstrom, grab an entire rack, and walk out with it, and it doesn’t go anywhere,” Villanueva said.

Villanueva, 59, said Gascon’s changes to prosecution policies in Los Angeles are being driven by a belief that the criminal justice system is racist. But when you look at “the hard facts on the ground,” he said, “my county jail is filled up by violence, not systemic racism.”

Gascon met with leaders of Black Lives Matter after his election as district attorney, Villanueva said, but didn’t even call the sheriff.

Heritage Foundation legal fellows Cully Stimson and Zack Smith, who spoke at the event, are writing a book on progressive, or “rogue,” prosecutors. (The Daily Signal is the multimedia news outlet of The Heritage Foundation.)

Stimson says the rogue prosecutor movement was influenced heavily by Black Lives Matter founder Patrisse Cullors as well as political activist Angela Davis, who embraced communism and the LA chapter of the Black Panther Party in the 1960s and 1970s.

Both women have advocated a world without prisons.

But Villanueva said he doesn’t see the racism that BLM claims in the Los Angeles County Sheriff’s Department, adding that about 74% of his workforce is minority.

Despite Gascon’s changes going easy on criminals, the sheriff said, he is optimistic that the public is beginning to see the nonsense and danger of the radical movement against law enforcement.

Have an opinion about this article? To sound off, please email [email protected] and we will consider publishing your remarks in our regular “We Hear You” feature.

The post Under Top Prosecutor’s Policies, Sheriff Says, ‘It’s Profitable to Do Crime in Los Angeles County’ appeared first on The Daily Signal.