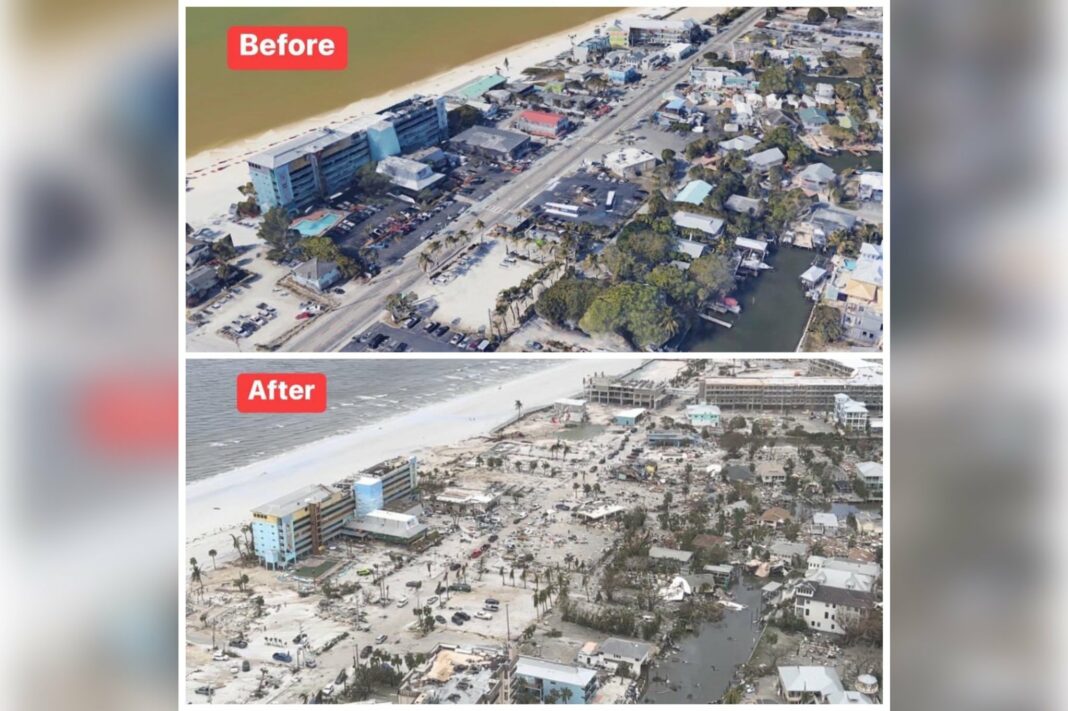 Hurricane Ian made landfall on Florida’s west coast on Wednesday as a category 4 storm.

The eye of the storm hit Cape Coral Wednesday with maximum sustained winds of 155 miles per hour.

At least a dozen people were killed by Ian’s combination of strong winds, heavy rain, and a high storm surge. Approximately 1.6 million customers in Florida are without power after Hurricane Ian made landfall Wednesday.

Hurricane Ian wreaked havoc and caused widespread destruction in Fort Myers, which was among the areas that were severely impacted.

Watch the videos below:

Ft Myers Beach is effectively gone, almost no emergency crews yet. These poor people need so much help… pic.twitter.com/5uLo26zFMZ

Joey Fernandez says he found one of his neighbors dead and holding onto his puppy after Hurricane Ian moved through San Carlos Island off the coast of Fort Myers.
Our full report: pic.twitter.com/RpReC1CtV2

Below is a before and after photo:

Watch the video below:

This morning Sheriff Carmine Marceno took a tour of Lee County to begin assessing damage caused by Hurricane Ian.
We are devastated. Our hearts go out to every resident who is impacted. The Lee County Sheriffs Office is mobile and will stop at nothing to help our residents. pic.twitter.com/S4OsB8ajRv

According to Mike Seidel, they were in the eyewall of Category 4 Hurricane Ian for over 5 hours.

“I haven’t experienced anything close to this in over 30 years,” he said.

We were in the eye wall of Cat. 4 #Hurricane #Ian for over 5 hours and the back side was the worst.
I haven’t experienced anything close to this in over 30 years @weatherchannel pic.twitter.com/wfEqcuEBAm

A resident from Fort Myers described the terrible event that took place there, News-Press reported:

Mitch and Mike sheltered on the third floor of the Estero Island Beach Club, where Mike worked. From there, they had a front row view of the chaos. Waves poured over Estero Boulevard, demolishing the lower floors of buildings and carrying away vehicles, they said.

The commercial center of the beach town was ravaged by the hurricane, he said. Mitch, who worked at the landmark Lani Kai resort, said the storm surge stripped the vacation spot’s first floor to its structural elements.

“it’s just concrete pillars going up. There’s nothing there,” he said. “Fort Myers Beach is gone.”

For Mitch and Mike, there was no coming back. Mitch said they planned to move elsewhere.

“There’s nothing here for us. Our jobs are gone. Our car’s gone. There’s nothing open,” he said. “It’s going to take a couple years to get this thing back into shape again.”

Ian was downgraded from a hurricane level 4 when it hit land to a tropical storm on Thursday morning.

Governor DeSantis is delivering an update on Hurricane Ian.

Watch the live stream below: