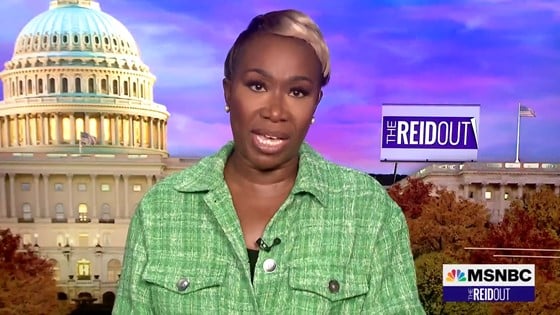 Millions of Americans today will gather around the kitchen table to celebrate Thanksgiving with their families. For Joy Reid, though, this is just another day to bash our beloved nation.

Reid opened her show last night by acknowledging Thanksgiving is a day of “cherished traditions” for millions of Americans who also enjoy “turkey, stuffing, mashed potatoes, and pumpkin pie.” But then she said this:

“But it is also to unpack the myth of Thanksgiving. It is a holiday riddled with historical inaccuracies. It is built on this myth that the indigenous welcomed their colonizers with open arms and ears of corn. A simplistic fairytale interpretation of a 1621 encounter between indigenous tribes and English settlers that erases the genocide that followed.

It’s the truth that Republicans want banned from our textbooks. Because here is the secret they want so desperately to keep: we are a country founded on violence. Our birth was violent. In 1619, a ship with more than 20 enslaved Africans landed in Virginia ushering in two centuries of American slavery that left millions in chains or dead.”

Joy Reid: “Here’s the secret they [Republicans] want so desperately to keep – We are a country founded on violence.” pic.twitter.com/OTozSWPhGA

None of this should surprise Gateway Pundit readers. In addition to her loathing of America, Reid has a long history of unabashed racism as well. The Gateway Pundit in January wrote about her ripping white Christian conservatives. Here is the video of her lashing out:

There are more videos of her repulsive racism. The first deals with her statements on the Gabby Petito disappearance and murder.  The link to the Gateway Pundit article on her comments on the case can be found here.

The second video shows her claiming back in March that Americans only care about Ukraine because they are white and Christian. Jim Hoft also wrote about her remarks.

Joy Reid makes everything about race again…Claims people are more compassionate towards Ukraine because it’s ‘White And Christian’ pic.twitter.com/6y7Tsrtx4B

Hate-filled leftists like Joy Reid simply have no joy in their miserable lives and cannot stand to see others content.  Perhaps Michael Savage was correct several years back when he diagnosed liberalism as a mental disorder.

The post What a Turkey! Hateful MSNBC Anchor Joy Reid Trashes Thanksgiving as a “Simplistic Fairytale” and Says America Was “Founded on Violence” appeared first on The Gateway Pundit.

Elon Musk Says He Will Create His Own Smartphone If Apple and Google Ban...

Fauci Admits he Based His Unprecedented US Economic Lockdowns on Draconian Measures Used by...