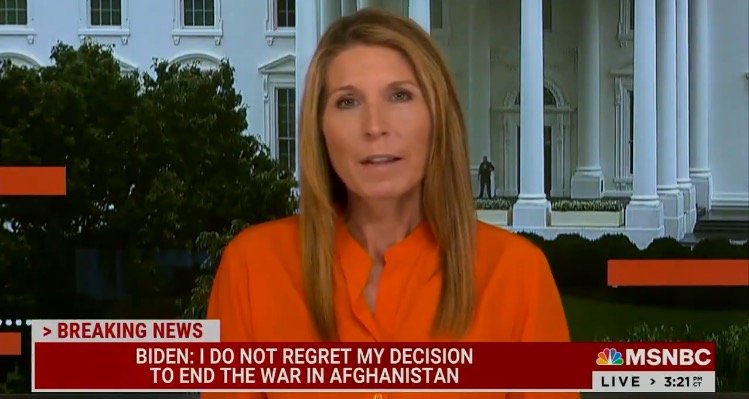 MSNBC’s Nicolle Wallace on Monday afternoon carried the water for Joe Biden after his disingenuous speech on his botched exit strategy in Afghanistan.

According to reports, Joe Biden overruled his own military leaders on the withdrawal.

The Taliban took control of Afghanistan within days as Joe Biden vacationed at Camp David.

Biden crawled out of his hole on Monday and delivered an appalling speech where he blamed everyone under the sun for the chaos in Afghanistan.

Joe Biden made sure to focus his speech on whether or not the US should be in an endless war in Afghanistan and purposely avoided talking about his disastrous withdrawal.

Instead of calling Joe Biden out for rewriting history, taking credit for the Bin Laden raid and creating a humanitarian crisis with his botched withdrawal, MSNBC ran cover for Dementia Joe.

“95% of the American people will agree with everything [Biden] just said. 95% of the press covering this White House will disagree,” Nicolle Wallace said as she gushed over Joe Biden’s speech.

MSNBC host @NicolleDWallace: “95% of the American people will agree with everything [President Biden] just said. 95% of the press covering this White House will disagree.” pic.twitter.com/UzLr6DPyPz

The post MSNBC’s Nicolle Wallace: 95% of the American People will Agree with Everything Joe Biden Said in His Afghanistan Speech (VIDEO) appeared first on The Gateway Pundit.