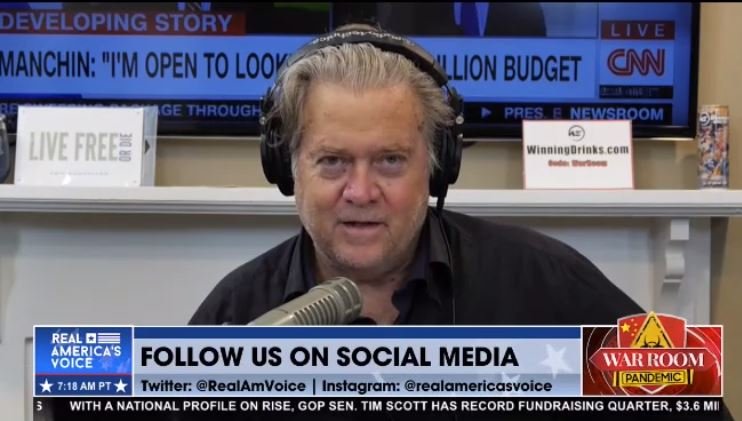 The Jan. 6 House Witch Hunt Committee, including dirtbag Liz Cheney and little Adam Kinzinger, to hold former Trump Chief Strategist in criminal contempt for refusing their planned show trial. Bannon told the committee he was not testifying after President Trump suggested his former staff not sit before the the liberal group.

The Jan. 6 Committee is not investigating the police killings that day. Two female Trump-supporters lost their lives that day due to actions by the Capitol Police.

The Jan. 6 Committee also is not investigating the FBI’s role in organizing the initial break-in into the US Capitol.

And the Jan. 6 Committee is not willing to release ALL of the video from that day that proves the innocence of hundreds of Americans.

They only want their show trial.

“We believe Mr. Bannon has information relevant to our probe, and we’ll use the tools at our disposal to get that information,” Chairman Bennie Thompson said ahead of the vote. “I expect that the House will quickly adopt this referral to the Justice Department and that the U.S. Attorney will do his duty and prosecute Mr. Bannon for criminal contempt of Congress.”

‘Everybody Is Very Concerned’: DC on Edge as Chinese-Made Drones Are Detected in Restricted Airspace

‘Everybody Is Very Concerned’: DC on Edge as Chinese-Made Drones Are Detected in Restricted...