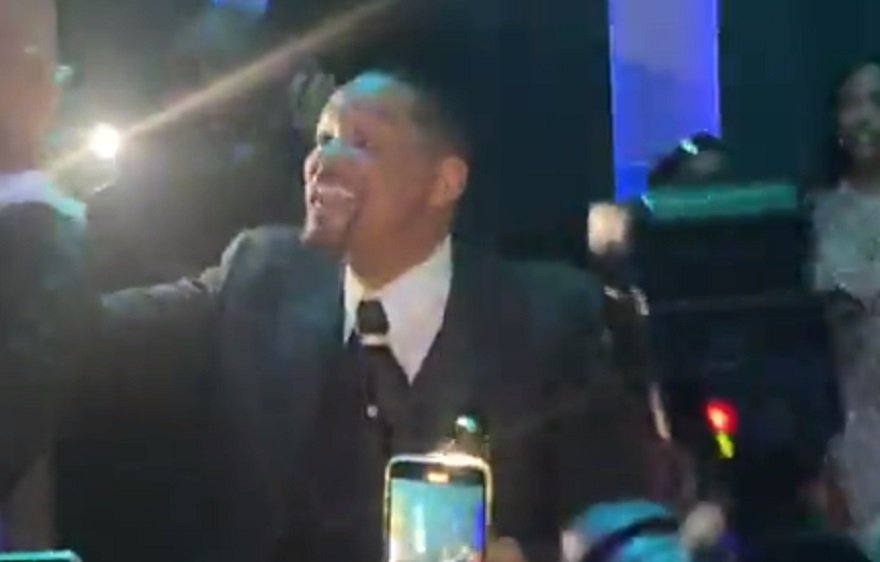 Actor Will Smith was filmed partying and dancing to his own songs at an Oscar Party after comedian Chris Rock opted not to file a police report.

Clutching his Oscar and smiling from ear to ear, Smith sang along to his own songs including “Summertime,” “Miami,” and “Gettin’ Jiggy Wit it.”

Will Smith is at the #VanityFairOscarParty dancing with his Oscar to ‘Gettin Jiggy With It.’ pic.twitter.com/PvKrRICQEN

“Smith seemed unbothered by the drama that happened on the Oscar stage earlier Sunday evening, when he slapped comedian Chris Rock for joking about his wife’s shaved head. Pinkett Smith has talked about her hair loss due to alopecia,” according to a report from the Hollywood Reporter. “Smith entered the party with not only his wife, but also children Willow, Trey and Jaden as well as other friends. Once inside, he was embraced by the likes of Lupita Nyong’o, Lena Waithe and Trevor Noah, who gave Smith a long hug as he talked in his ear.”

Will Smith holding court at the Vanity Fair party, dancing to his hits pic.twitter.com/PtX7tnsNKS

“It’s been a beautiful night,” Smith told The Hollywood Reporter.

The Los Angeles Police Department said that Chris Rock declined to file a police report after being slapped by Smith on the Oscar stage.

In a statement about the incident, the LAPD said that if Rock wants to file a report at a later date, he can.

“The individual involved has declined to file a police report. If the involved party desires a police report at a later date, LAPD will be available to complete an investigative report.” pic.twitter.com/cgzD9UPUlF

The comedian was presenting the award for best documentary and picking on members of the audience, as comedians often do. He said that he couldn’t wait to see Pinkett Smith star in “G.I. Jane 2,” referencing Demi Moore’s shaved head for the 1997 film. Rock was poking fun at Pinkett Smith’s hair cut — a shaved head due to her battle with alopecia.

Smith could be seen initially laughing at the jab, but Pinkett Smith looked enraged — and moments later Smith was on the stage b-tch slapping Rock on live television.

The uncensored exchange between Will Smith and Chris Rock
EVERYONE THOUGHT IT WAS FOR FUN BUT IT DIDNT SEEMED TO BE..WILL SMITH REALLY LOSES HIS COOL AND SLAPPED CHRIS ROCK..EVERYONE SEEMS TO BE UNCOMFORTABLE #Oscar #Oscars2022 #OscarsFanFavorite pic.twitter.com/IDScbswCWM

The actor was not removed from the venue over the assault and minutes later was given the award for best actor.

Will Smith’s acceptance speech as he wins his first ever #Oscar pic.twitter.com/qKVTOb7V6Q

During his acceptance speech, Smith tearfully apologized to the Academy and his fellow nominees, but notably did not apologize to Rock.

“I want to be an ambassador of that kind of love and care and concern. I want to apologize to the Academy, I want to apologize to all my fellow nominees. This is a beautiful moment and I’m not crying for winning an award,” Smith said through tears. “It’s not about winning an award for me; it’s about being able to shine a light on all the people … and the entire cast and crew of King Richard and Venus and Serena and the entire Williams family. Art imitates life. I look like the crazy father, just like they said about Richard Williams! But, love will make you do crazy things.”

The post WATCH: Will Smith Holds Court and Dances to His Own Songs at Oscar Party After Chris Rock Opted Not to File Police Report appeared first on The Gateway Pundit.

“I Want America to Wake Up and Pay Attention, Something Aint Right!” – Silk Describes How Her Sister Diamond ‘Died Suddenly’ in Her Kitchen...

“I Want America to Wake Up and Pay Attention, Something Aint Right!” – Silk...