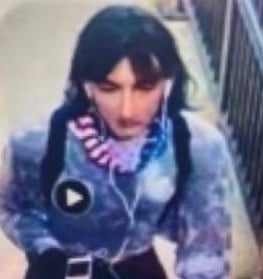 WGN in Chicago released a picture of the Highland Park shooter attempting to evade police after killing 6 and injuring more than 20 others.

We reported earlier that it was reported that the Highland Park killer wore women’s clothing when evading the police:

The gunman accused of fatally shooting seven and wounding over 30 people at a Highland Park Fourth of July parade wore a disguise and blended into the crowd he fired upon before he fled the scene and was eventually caught by police.

Police said he had planned the attack for weeks and on Monday, was able to access the roof of a business near the parade route and fired over 70 rounds into a panicking crowd.

The downtown parade was disrupted around 10:10 a.m. after shots were fired near Central Avenue and 2nd Street.

According to WGN News anchor the channel had obtained a picture of the killer in drag.

WGN Investigates has obtained an image of the suspected parade shooter dressed as a woman. Police say he wore the disguise to aid in his escape. https://t.co/KwPtulXno3 @WGNNews pic.twitter.com/GniP3CLBNA

Here is as reported from WGN: