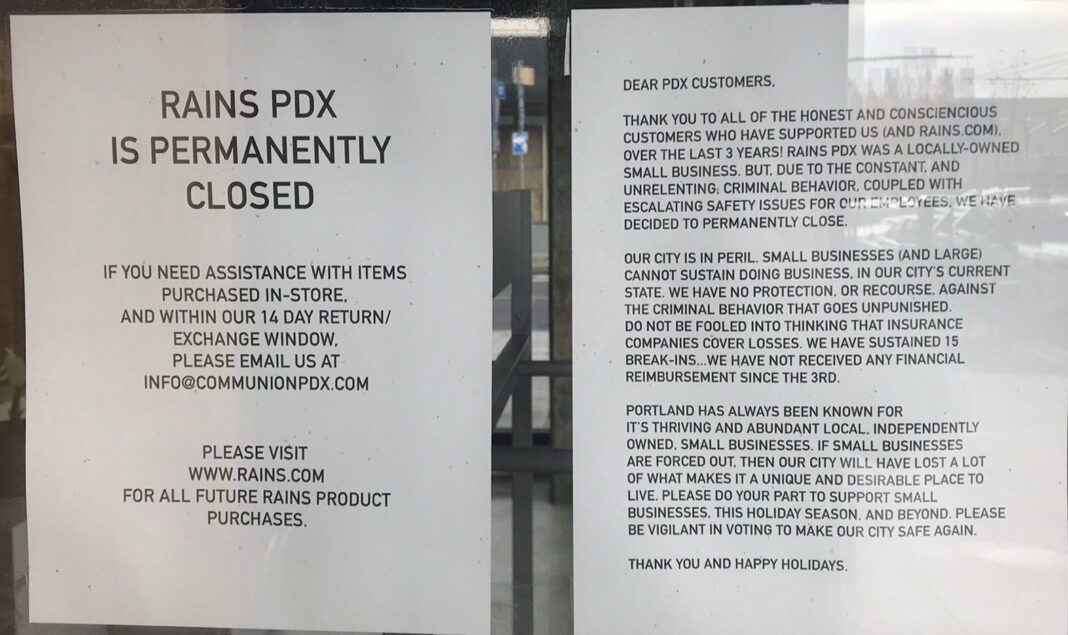 While Portland is supposed to be a left wing utopia, the homeless problem there is so bad that some people are selling their houses in the Democrat run city to escape from it.

An 82-year-old died after he was brutally beaten in an unprovoked attack at a Portland bus stop.

The city was embroiled conflict for days after the Roe v. Wade Supreme Court ruling on abortion, smashing windows and vandalizing several buildings.

In April, Antifa terrorists attacked participants of the People’s Convoy from an overpass throwing  paint-filled balloons and rocks onto vehicles along the 205 North.

One woman died and five others were injured in a mass shooting involving Antifa militants at an anti-police protest.

One business owner in the city, clothing store Rains PDX,  has had enough and permanently closed the store after endless break-ins, five in the last three weeks alone,  that financially ruined the business.

The owner at Rains tells me after five break-ins in about three weeks, she made the sudden decision to permanently close. Staff here are putting pressure on the city to look after small businesses dealing with ongoing challenges with crime. pic.twitter.com/XyP2p6PR6W

The letter posted on the shuttered business read:

Thank you to all the honest and conscientious customers who have supported us (and Rains.com). Over the last 3 years! Rains PDX was a locally-owned small business. But due to the unrelenting criminal behavior, coupled with the escalating safety issues for our employees, we have decided to permanently close.

Our city is in peril. Small businesses (and large) cannot sustain doing business, in our city’s current state. We have no protection, or recourse, against the criminal behavior that goes unpunished. Do not be fooled into thinking that insurance companies cover losses. We have sustained 15 break-ins … we have not received any financial reimbursement since the 3rd.

Portland has always been known for it’s thriving and abundant local, independently owned, small businesses.  If small businesses are forced out, then our city will have lost a lot of what makes it a unique and desirable place to live. Please do your part to support small businesses this holiday season and beyond.  Please be vigilant in voting to make our city safe agains.

Thank you and Happy Holidays.

Local Official Says Border City Of Yuma, Arizona Is On ‘Brink Of Collapse’ Due To Illegal Border Crossers

Local Official Says Border City Of Yuma, Arizona Is On ‘Brink Of Collapse’ Due...