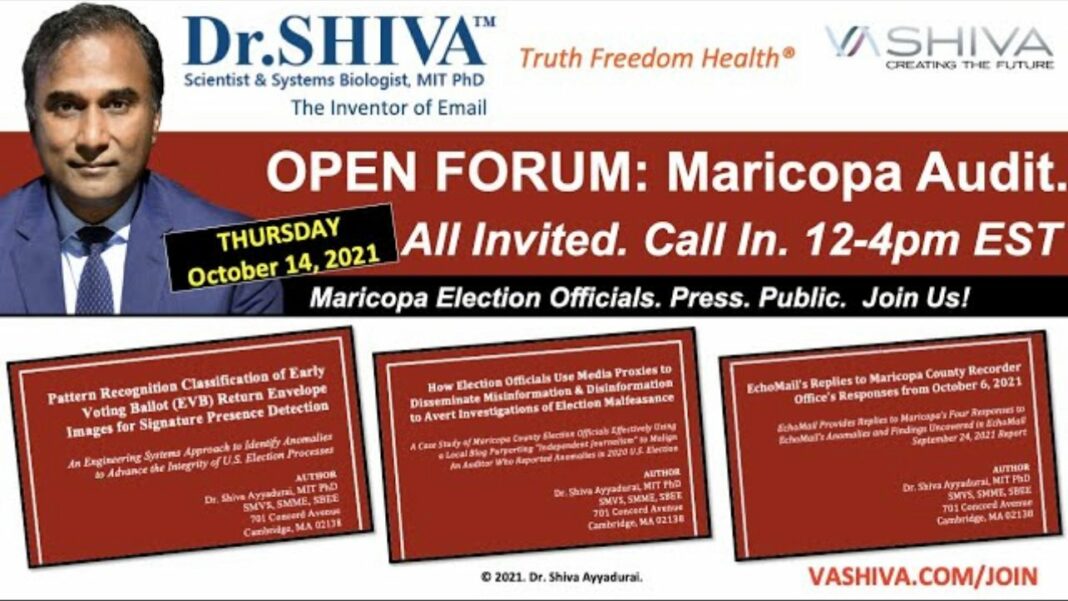 Dr. Shiva Ayyadurai, MIT Ph.D. SMVS, SMME, SBEE, and the inventor of the email as we know it today, has invited Maricopa County elections officials to an open dialog with him tomorrow.

Maricopa County’s preferred method of communication with the Arizona Senate is through their Twitter page, media networks, and Dr. Shiva concludes that they’ve been using a secret media proxy to disseminate misinformation through their own posts to Arizona Mirror.

BREAKING: Arizona Attorney General Mark Brnovich Releases Statement – “I Will Take Necessary Actions That Are Supported by Evidence and Where I Have Legal Authority”

Dr. Shiva wants to have an open forum instead of the unproductive online back and forth between County officials and audit officials.

Since the beginning, Maricopa County has refused to comply or answer the auditors’ questions.

Dr. Shiva Ayyadurai, MIT PhD, the Inventor of Email, who was commissioned by the Arizona State Senate, will be holding an OPEN FORUM on October 14, Thursday, to motivate open dialog among the public, press and Maricopa Election Officials to address the anomalies discovered by the EchoMail audit of Early Voting Ballot Return Envelope Images.

On September 24, 2021, Dr. Shiva submitted his 99-page audit report and gave a presentation to the Arizona State Senate. The report, presentation as well as other documents can be found here: https://vashiva.com/dr-shiva-delivers-groundbreaking-audit-report-to-arizona-senate/.

Since that report, the media has been spreading misinformation and disinformation to avoid the central issues uncovered by Dr. Shiva’s audit. The Maricopa Election Officials are invited to this dialog. Using behind media proxies to avoid discussion is not productive for the public to understand the substantive issues. Dr.SHIVA encourages the Press, the Public and the Maricopa Election Officials to attend so we can advance election systems integrity.

Dr. Shiva’s audit presentation showed that over 17,000 ballots were duplicated more than once possibly causing fake votes to be recorded.

Maricopa County still refuses to answer any questions and instead, they make statements on Twitter and in the news saying auditors are wrong with no explanation.

Contact Maricopa County and demand they attend the forum with Dr. Shiva here.